“Legends of the Superheroes”: An Odyssey Better Left Unfinished

Originally published August 29th, 2015, I felt like this should be revisited and updated…

The best thing that happened on TV when I was nine. It was January, 1979, and there were two hour long shows. One aired per week on NBC. I was able to see the first and was SUPER excited to watch the second part. Well, because I don’t remember the details, I lost my TV privileges, and wasn’t able to watch the second part. My life was over! There wasn’t this widespread device called a VCR, at least not in my life. Once something was on TV as a “Special Event” that was it, game over if you missed it. It sucked to be me. Who knows, I could have become so much more than what I am today! DAMNITALL!

Fast forward to, roughly, 2004-ish, my internet was still dial-up, due to where I was living, and I had just discovered that both parts of this were being offered as something called a “torrent”. I had no clue what that was so I dug deeper and discovered that I couldn’t access it. Enter my best friend, since we were twelve, I asked him to download the episodes and he agreed to. He was interested too so it was a win – win. Right? Well… no. He told me to not expect too much out of the show. Did I listen? Heck no! My inner nine year old was already to, FINALLY, complete the journey that he had set out on a quarter of a century earlier. 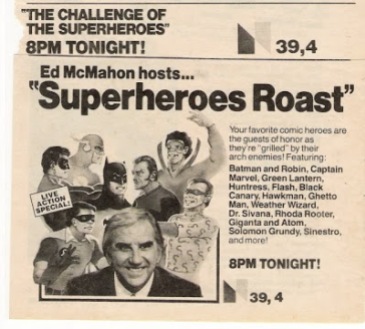 You see, the second part involved a celebrity type roast, hosted by the incomparable Ed McMahon.  Ummm… What the…? Don’t get me started on “Ghetto Man”. Yep. Not cool at all. I usually like to enjoy anything, even bad things, so it’s a little disappointing that I have to file such a bad review to the back half of the program. Having said that, it IS very riffable, and if you can get past the cringe-worthy parts then more power to you.

I should have just stuck with the first half of the “event”. It had a 70’s flavor that makes me smile, and I will continue to watch it from time.

The moral of this tale, True Believers, is that I may have ended up in prison if I had been able to watch the full program in 1979. We will never know what might have been. Stick with the opening episode, while it isn’t riveting television, it is entertaining.